As a US expatriate working overseas you must file your US federal taxes annually just as you would if you were living in the United States.  Why?  Because your total world income determines your tax liability – not simply the income you receive in the states.  As an American expatriate, though, you have more tax saving options than those with a stateside residence. Such provisions include:

With proper planning and quality tax preparation, you should be able to take advantage of these and other strategies to minimize or even eliminate your US expat taxes.  Please note that even if you do not believe that you owe any US income taxes, you still have to file a return – or you may lost the deductions!  For more information, see our guide for US Expat Taxes and the list of US Expat Tax Deadlines for more information.

Tax Rules for US Expats Living and Working in China

Every individual who is working in China is subject to ITT (Individual Income Tax).  Additionally, any expat who is employed by a business or corporation in China which is sustained by foreign investments is subject to ITT upon their arrival in China.

IIT is typically withheld from employees’ wages by their employer and remitted to Chinese tax authorities every month.  All withheld taxes are due no later than the 15 of the month following the month in which wages or salaries were earned.  At the end of the tax year, employees are required to file an ITT declaration of all taxes withheld throughout the year to the Chinese tax authorities.  These declarations are due no later than March 31 of the following year, and late filing penalties of up to five times the amount owed can be assessed for late declarations.

ITT declarations are required to be filed annually by any tax payer who is liable for ITT in China and meets any one of the five conditions outlined below:

·         Earned taxable income from which ITT was not withheld

·         Meets any other condition established by the State Council

·         Income derived from a transfer of property or lease

What are the ITT Rules on Expatriate Income?

Expats who are working in China on a temporary assignment lasting less than 90 days out of a calendar year are exempt from Chinese taxes.  If the expat’s home country has an active double taxation treaty with China, the threshold for exemption is 183 days.  Individuals who remain in China for a period lasting longer than 90 days (or 183 days where applicable) will be subject to ITT on all income earned for work conducted in China, despite the source of the income.

If an individual lives in China for 5 years and on the 6th year spends less than 1 year in China, the 5 year calculation period will start over and the expat will once again be eligible for the 90 day/183 day tax exemption rule.  In order to be considered as ‘not living in China for a calendar year,’ an expat must be out of the country for a period lasting longer than 30 days or more than 90 days altogether.

ITT is assessed according to progressive income levels, and the ITT rate ranges all the way from 3% to 45% of each month’s taxable income.  Taxable income is figured by subtracting a standard monthly deduction from employees’ actual monthly earned income.  The deduction is RMB3,500 for locals (except residents of Hong Kong, Macau, and Taiwan) and RMB4,800 for foreign nationals working in China.  If you have paid into China’s social insurance program, you may be able to deduct your contribution amount from your actual earned income, as well.

Calculating ITT is generally easier for residents of China than for expats working in China.  Expatriates need to consider the length of time they’ve spent working in China as well as the source of the income they earn.  See the chart below for help calculating your ITT liability. 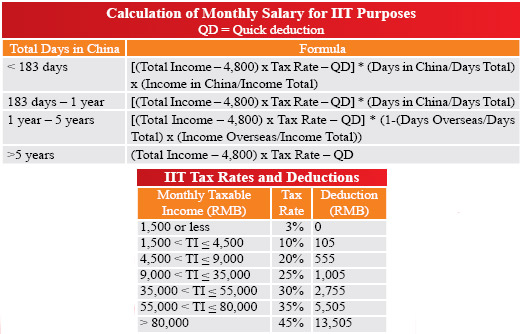 As indicated earlier, almost every type of income is considered taxable by Chinese tax authorities for the purpose of ITT.  Like the United States, however, there are certain expenses which may be exempt from taxation under ITT regulations assuming other criteria are met.  These expenses include:

Note:  Cash allowances paid to an employee to compensate for anticipated work-related expenses will be completely subject to employee taxation.  Tax liability may be reduced if other reimbursements are made for items such as entertainment, fees for a social or health club, communication expenses, and a variety of other reimbursements which are not covered by an allowance.

The article is merely an overview of an overwhelming amount of US expat tax information. For additional help, please contact the experts at Taxes for Expats today!

My Second Day In China

Expat Life in China | 5 Biggest Changes Over the Past Decade

What makes me want to stay in China?

Living in China during coronavirus outbreak